A lightweight version of Ableton Live 10, still equipped with their fundamental instruments, effects and workflow. 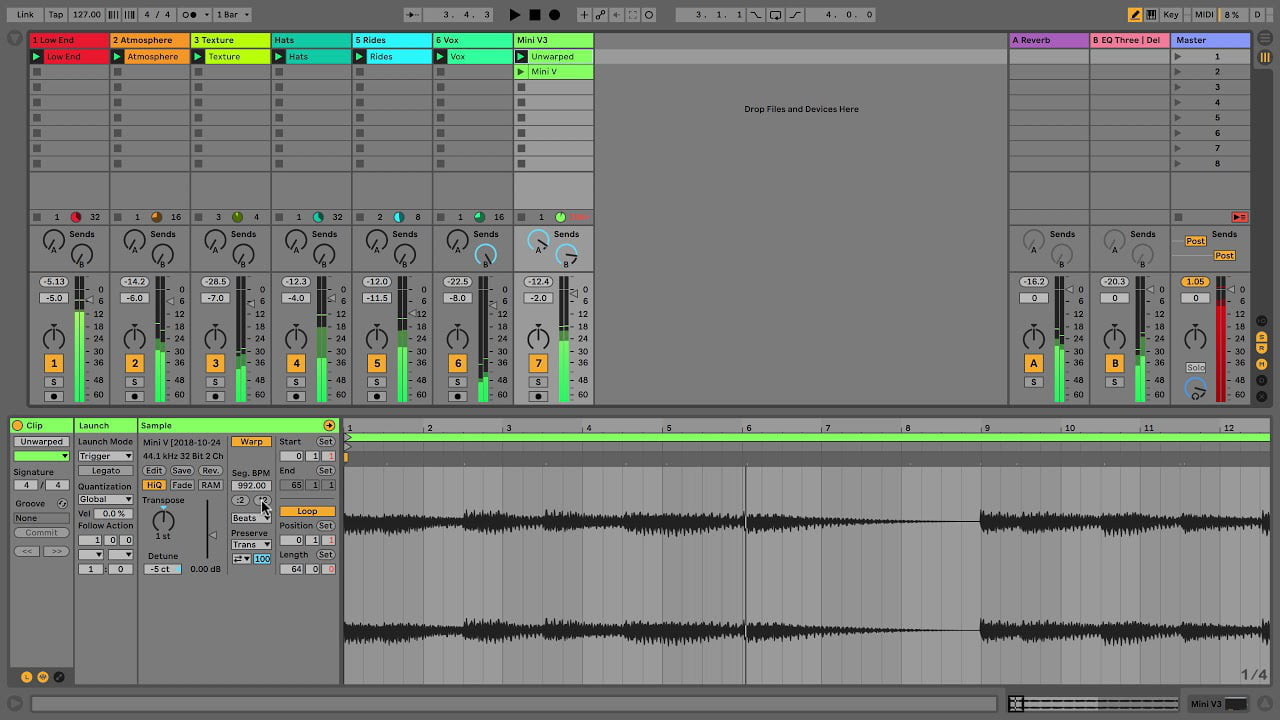 Ableton is a versatile, sophisticated DAW and limitations of these Lite versions are awesome if you’re learning to compose or record. You will commit to the direction of your track with greater ease and learn the ins and outs of this software.

Reddit: Ableton Lite is not as light as many think

Ableton Live 10: Intro vs. Standard vs. Suite vs. Lite – Which Should You Buy? [Video below]

MusicTech: How to get the best out of Ableton Live Lite & Intro

Ardour is another free software which strives to be used professionally. It’s not too complicated and can handle a wide number of commonly used VST and plugins. 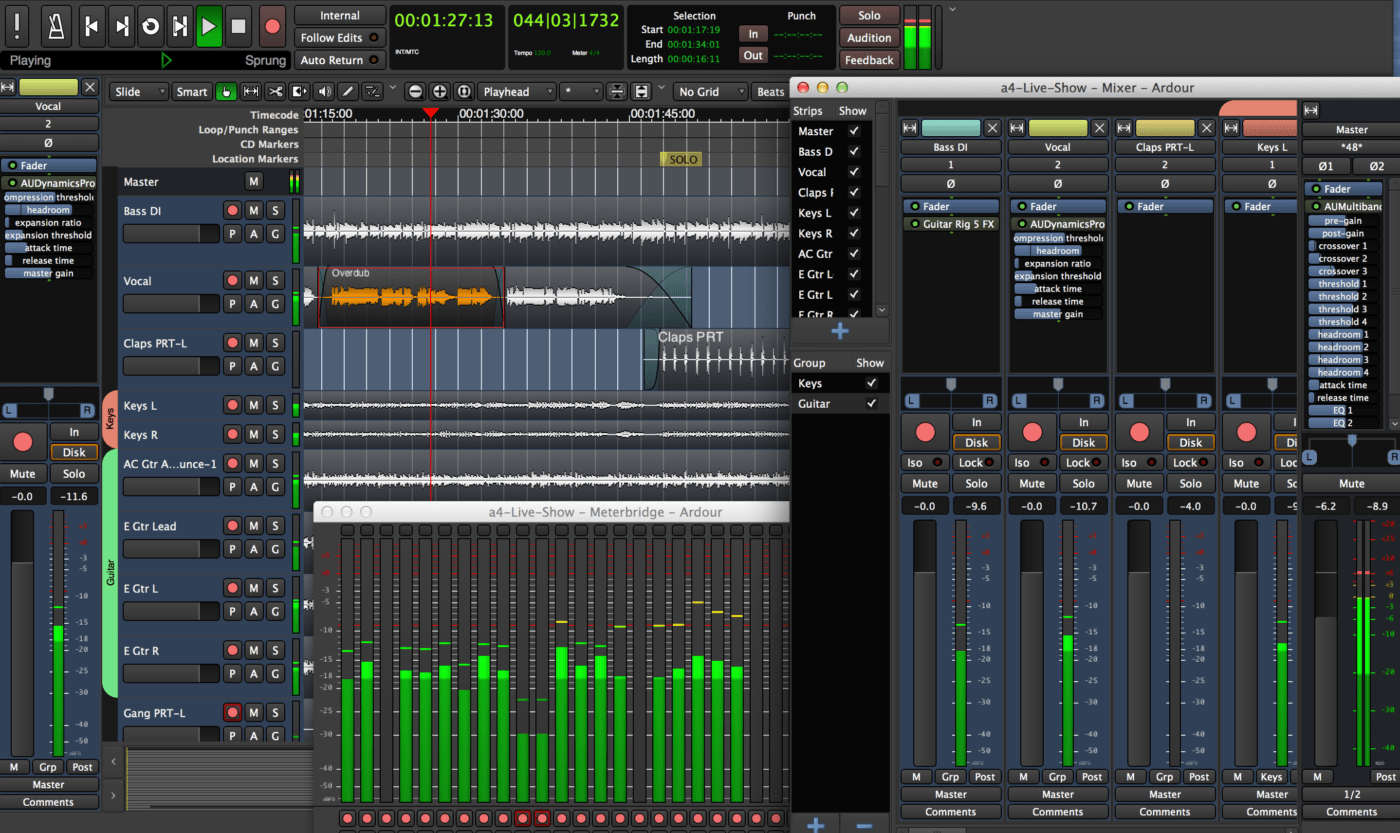 Ardour is another free software strives to be used professionally. It’s not too complicated and can handle a wide number of commonly used VST and plugins. It runs on Microsoft Windows, macOS, Linux and FreeBSD.

How to use the Ardour Interface | Ardour 5 Tutorial [Video below]

A simple, multi-track audio editor and recorder for Microsoft Windows, macOS, GNU/Linux and other operating systems. 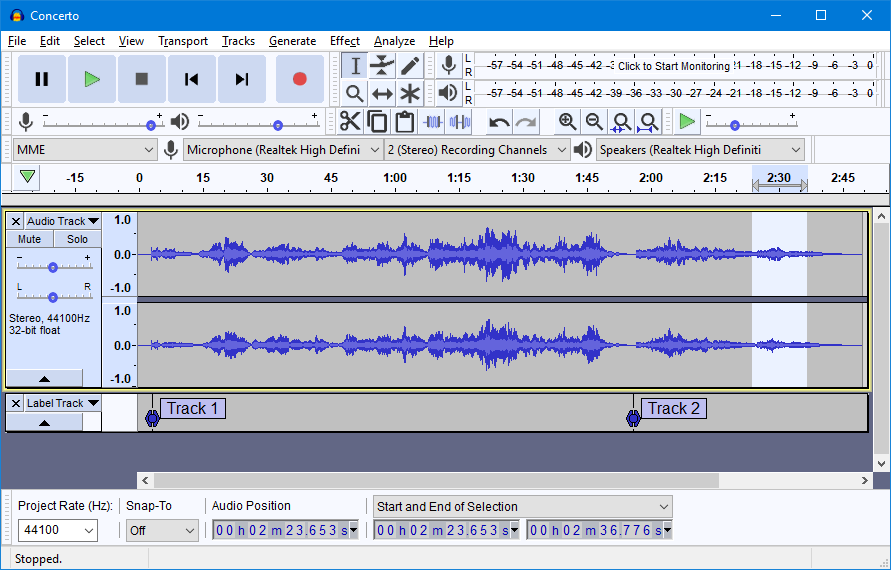 Developed by a group of volunteers, Audacity is an open source program that provides all the basic essentials to start recording. It offers its services in a multitude of languages, and can be a great place to start.

Audacity: Complete Tutorial Guide to Audacity for Beginners [Video below]

A collaborative, music studio right in your browser. 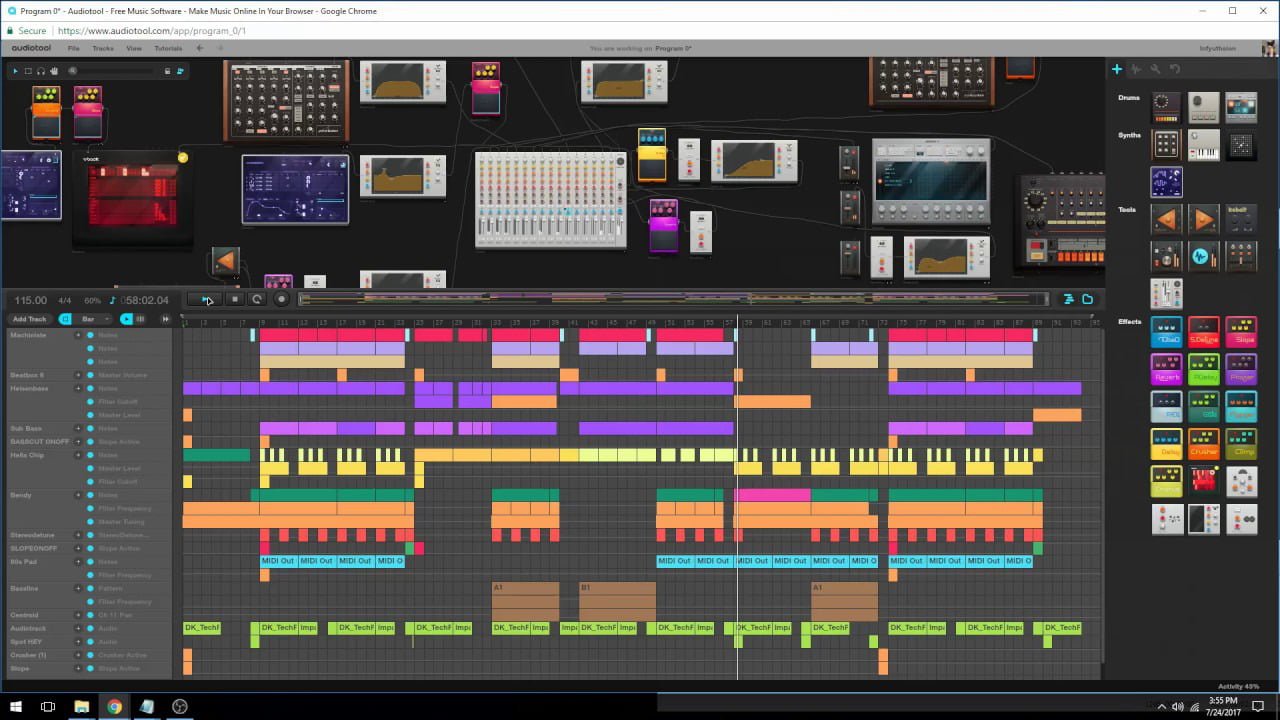 Ideal for anyone looking to make beats (specifically in the electronic genre) without having to download any software. Just load the app on your browser, much like a flash plugin. Sounds automatically backup into the cloud, so you won’t have to worry about losing progress!

Audacity: Complete Tutorial Guide to Audacity for Beginners [Video below]

A cloud platform made for musicians and fans to create, collaborate and engage with each other! 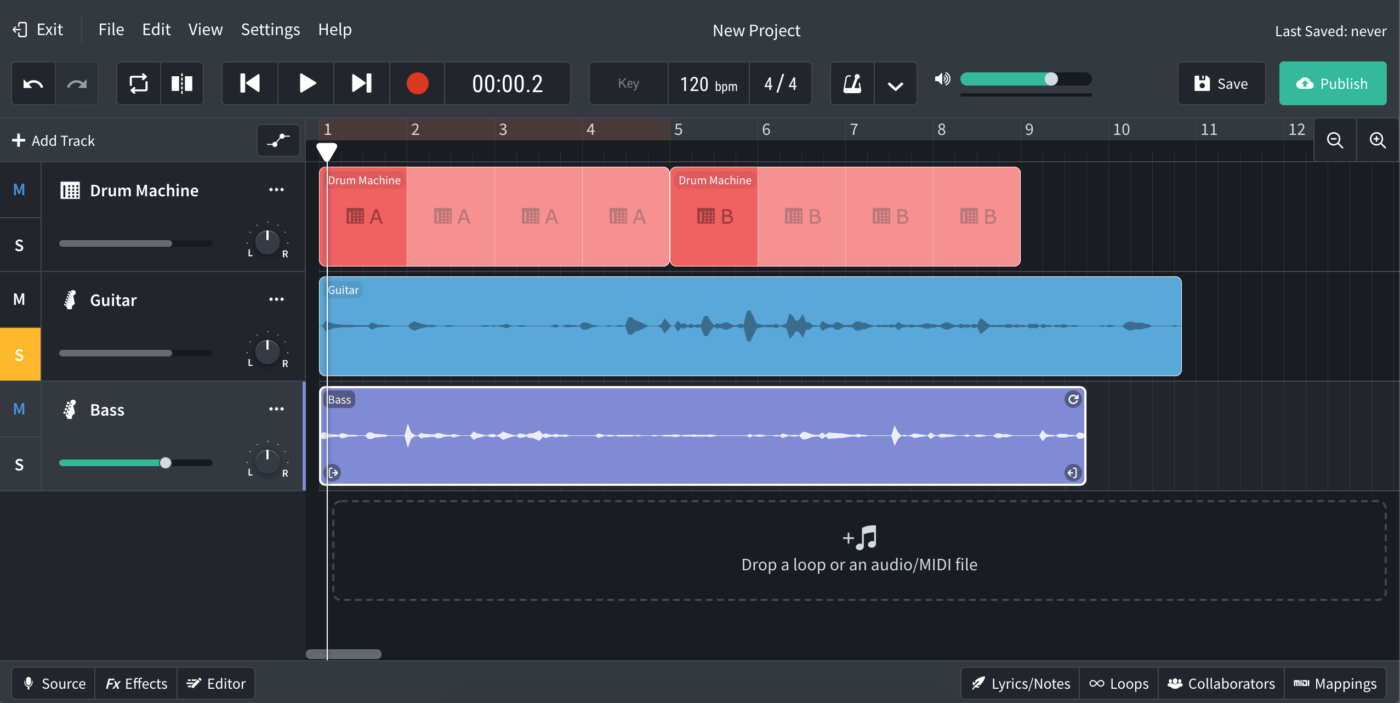 Similar to Audiotool, BandLab is an easy-to-use digital audio workstation with no download required. All in browser, all backed up online – you can even log in through your social media account. Very easy.

How To Mix Vocals in BandLab [Video below] 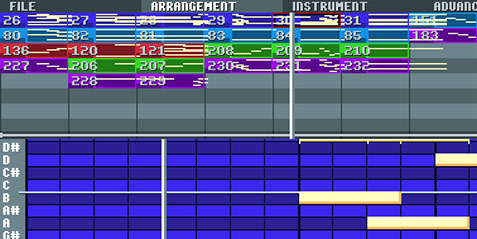 A free, easy tool designed for artists new to composing music on DAWs. It’s available for download or can be used in-browser! Great for video games.

How to make Music for your Game – BOSCA CEOIL [Video below]

An impressive workstation for PC users that emulates the feel and look of an analog console. 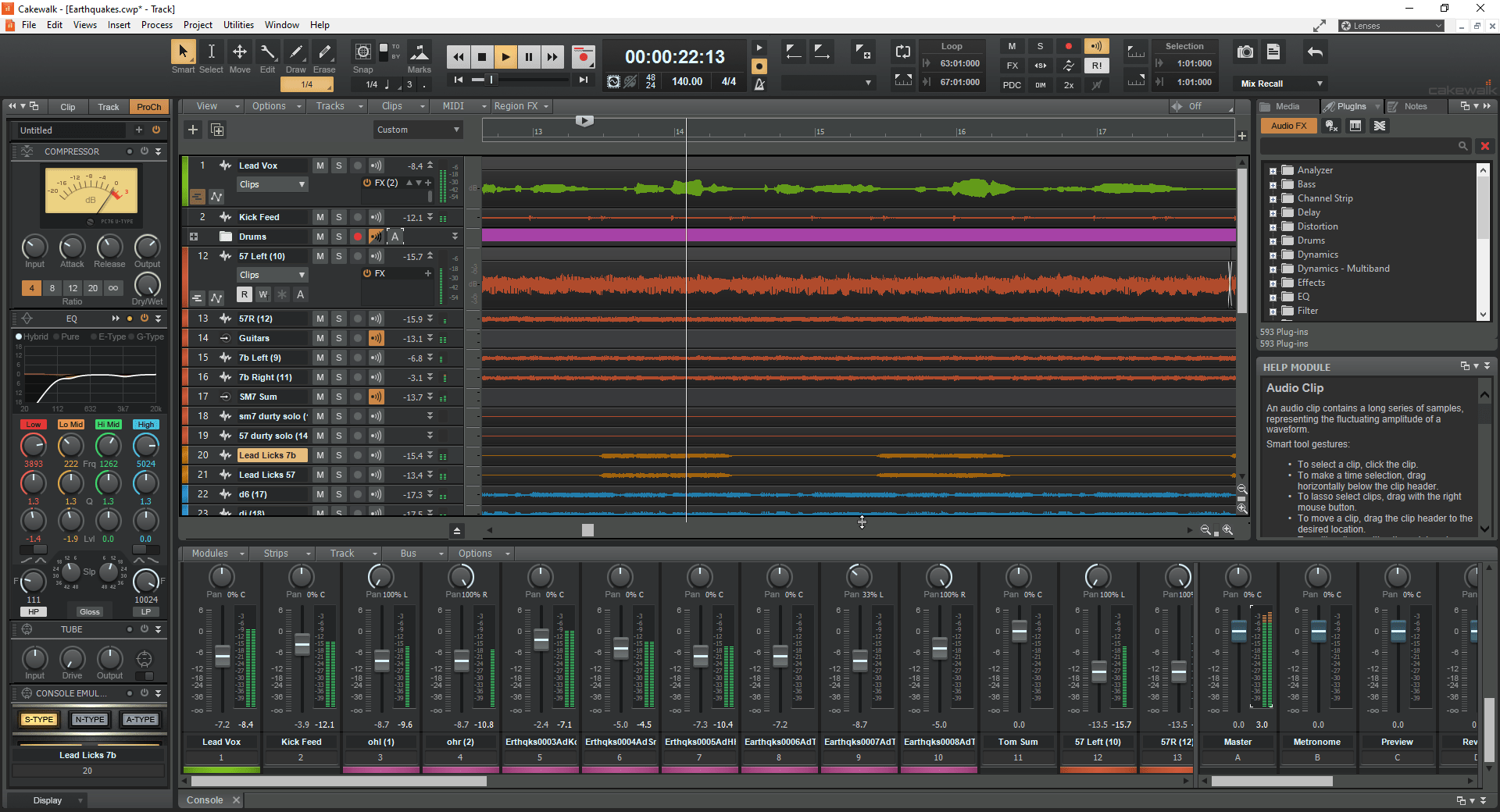 Previously known as Sonar, CakeWalk is a free and impressive workstation available to PC users. Compose, record, edit, mix, master and share your songs with this gem!

Why Cakewalk by Bandlab? Top 5 Reasons [Video below]

A simplified DAW with great virtual instruments and the same core technologies as Cubase Pro. 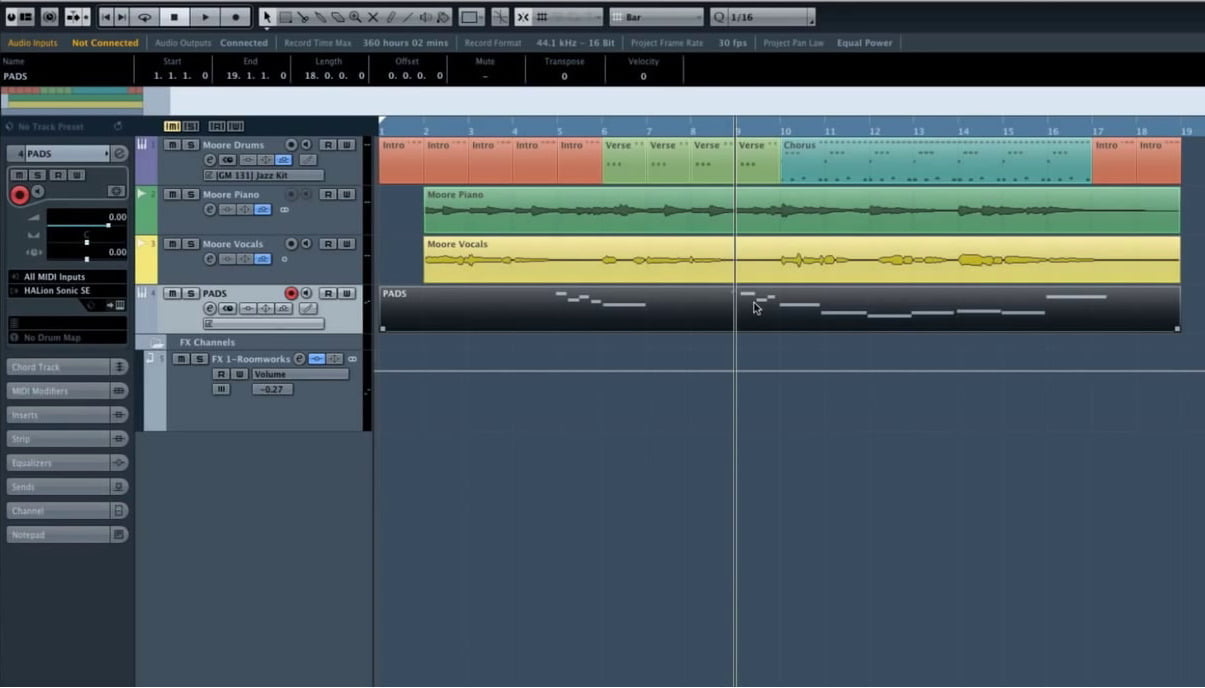 Using the core technologies that are used in Cubase Pro, Cubase LE provides fundamental tools to record, edit and mix for free. It’s a reliable DAW created by a company that meets industry standards.

An easy-to-use digital audio workstation and a staple amongst macOS users. 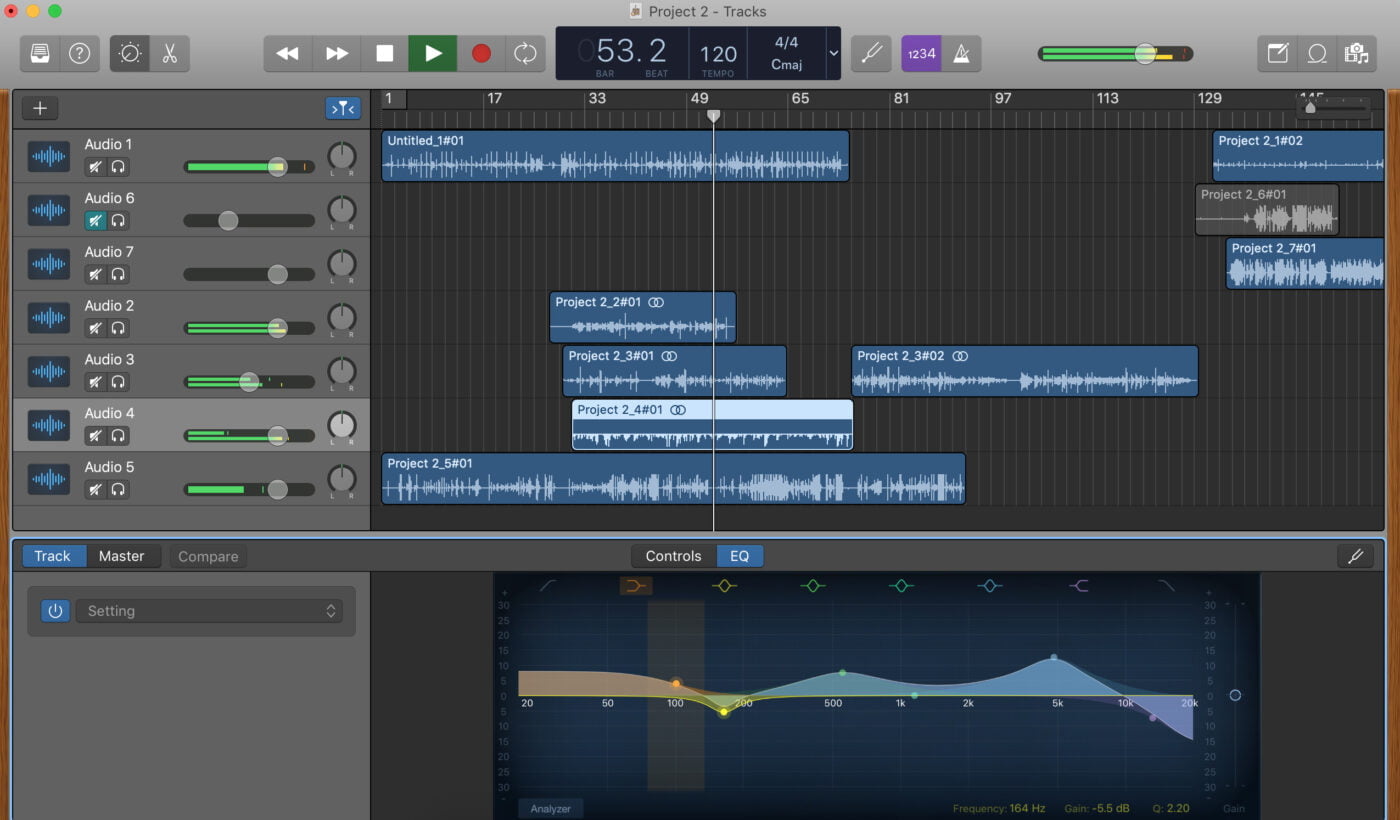 Created by Apple, GarageBand is a workstation that welcomes beginners and more experienced artists alike. It has all the fundamentals of a standard DAW with the great advantage of it being easy to use. Available for mobile devices as well!

GarageBand Tutorial for Beginners [Video below]

Garageband Tutorial: How to Make a Basic Track [Video below]

An open source DAW created by a small group of volunteers, available to Windows, macOS and Linux users. 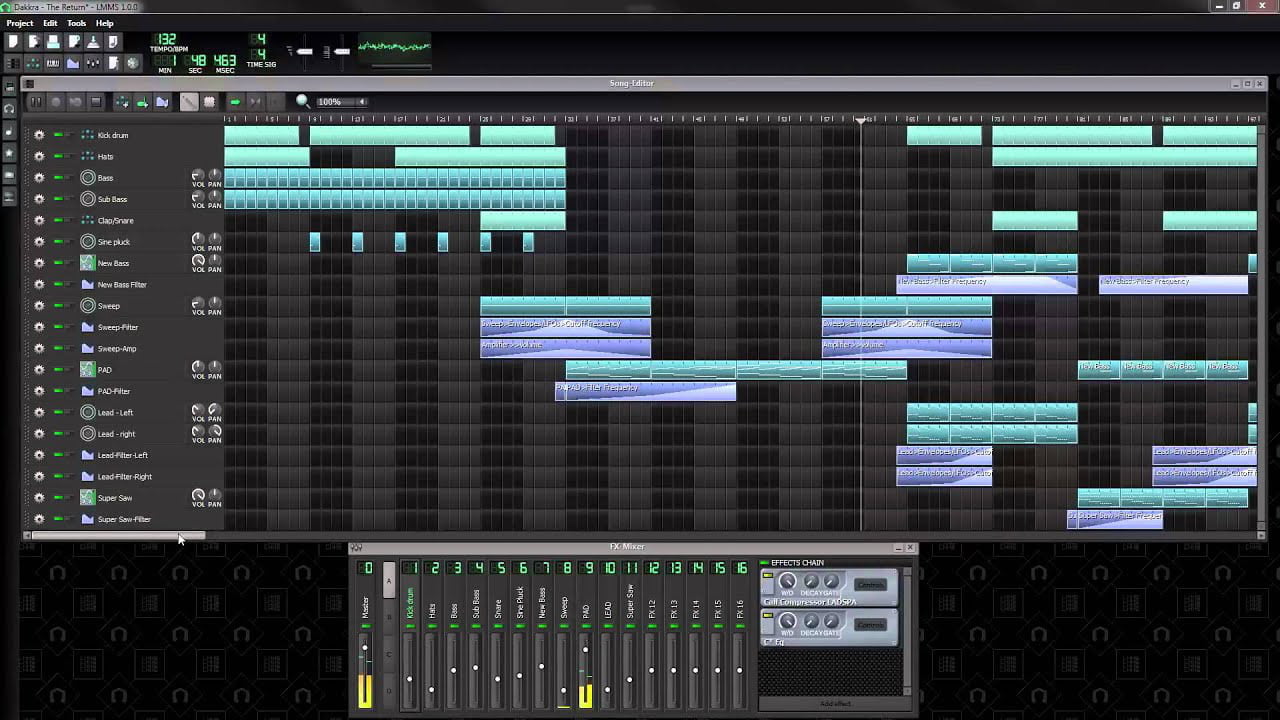 This workstation has been around for a while, and has certainly improved over the years. Though it can record MIDI, it currently does not record audio. If you’re having trouble navigating the software, try activating the “What’s this?” function. Tutorial links are on the right for more help.

How To Use LMMS – Tutorial For Beginners (FREE DAW) [Video below]

LMMS Lesson 1 – Getting Started [Video below]

A free, trial equivalent of their other editions with a simplified layout and a streamlined workflow. 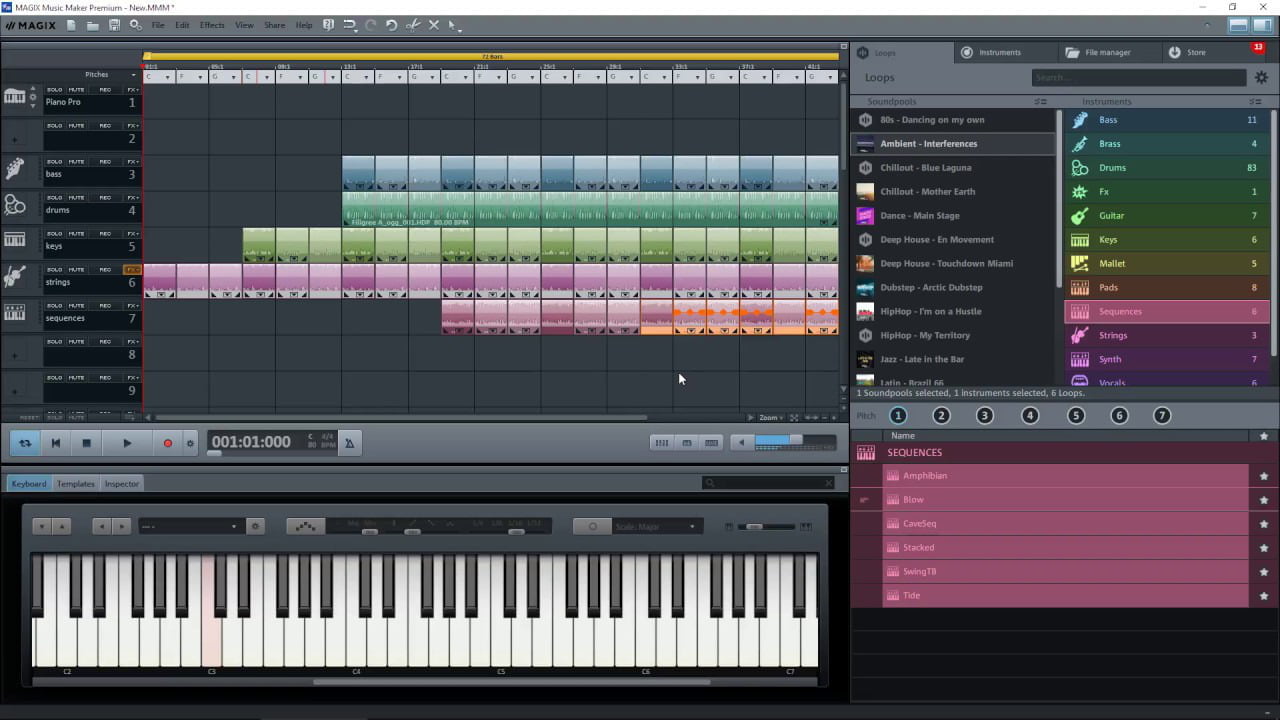 A typical, entry-level DAW with all the things needed if you’re a beginner or hobbyist! The audio engine is great, it’s MIDI compatible and the workflow is very good. Perfect for it’s simplicity!

Magix Music Maker Free, Plus and Premium 2020 Review [Video below]

A free version of NCH’s recording and mixing software for non-commercial use with simplified mechanics.

MixPad is a recording and mixing software created by NCH with a free alternative for non-commercial use. This stripped down version is easier to understand, still equipped with: drag-and-drop layout; clip editing and ripping; sampling; pitch shifting; effects; and low latency recording.

A demo of a quality DAW, equipped with great MIDI management and intuitive design. Available to Windows and macOS users. 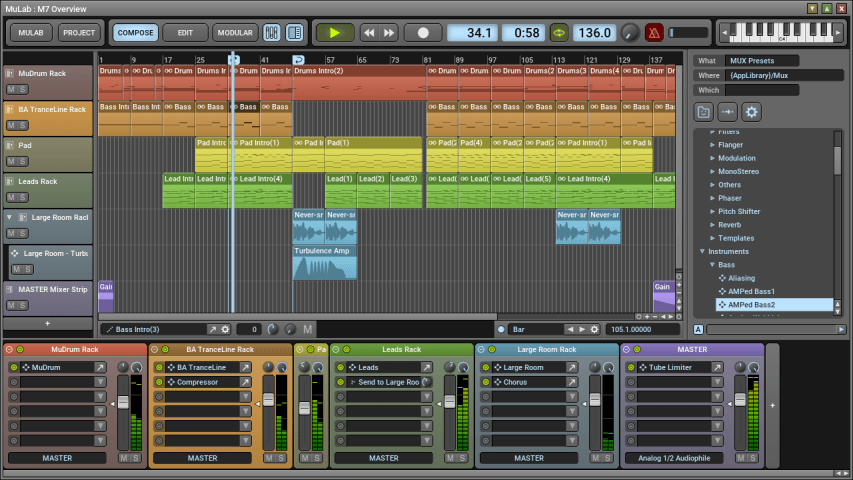 MuLab 8 is an awesome DAW with great capabilities. Everything works well, MIDI management is tight and it’s design is intuitive. MuLab 8 operates in Demo Mode and Full Mode, the former meaning: no saving projects; recurring demo reminders, must restart after 30 minutes, exporting audio files limited to 16 bit; and occasional audio watermarks. Buying a €69.00 user-key from their store will remove these restrictions and switch to Full Mode.

VST Parameters in Mulab and MUX [Video below]

A comprehensive, responsive audio editor for Windows, macOS and Linux users that can handle large files in multiple formats. 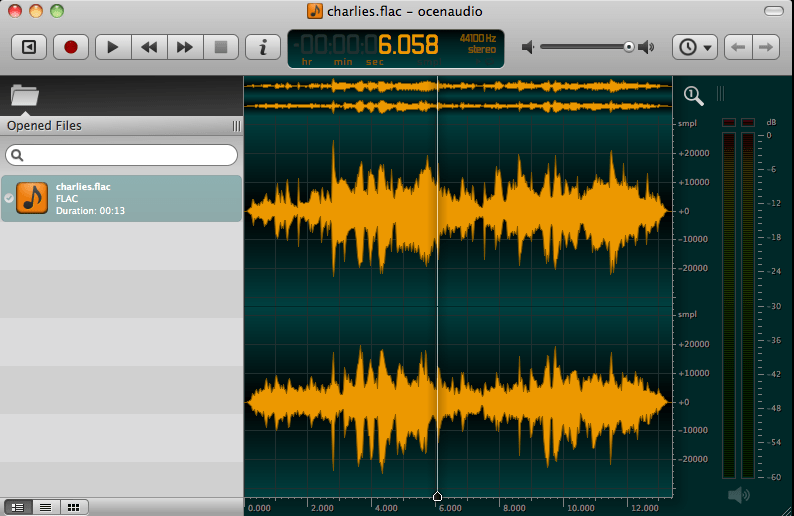 Ocenaudio is an audio editor closer to the capabilities of Audacity rather than a fully loaded DAW. It has a spectrogram, built-in filters, supports VST plugins and can handle large files without crashing. It’s easy to understand and comes with useful tools for file and audio analysis.

How To Use OceanAudio [Video below]

A unique, collaborative DAW: start projects, invite musicians and make music together through the software in real-time.

Ohm Studio is one of a kind in how it brings musicians together. It is a realtime, collaborative DAW available on Steam (sometimes listed as a video game) that lets invited users navigate the tracks – you can easily see where and what they are working on. Very cool!

A fully functional, freeware edition of Podium for Windows with a few limitations. 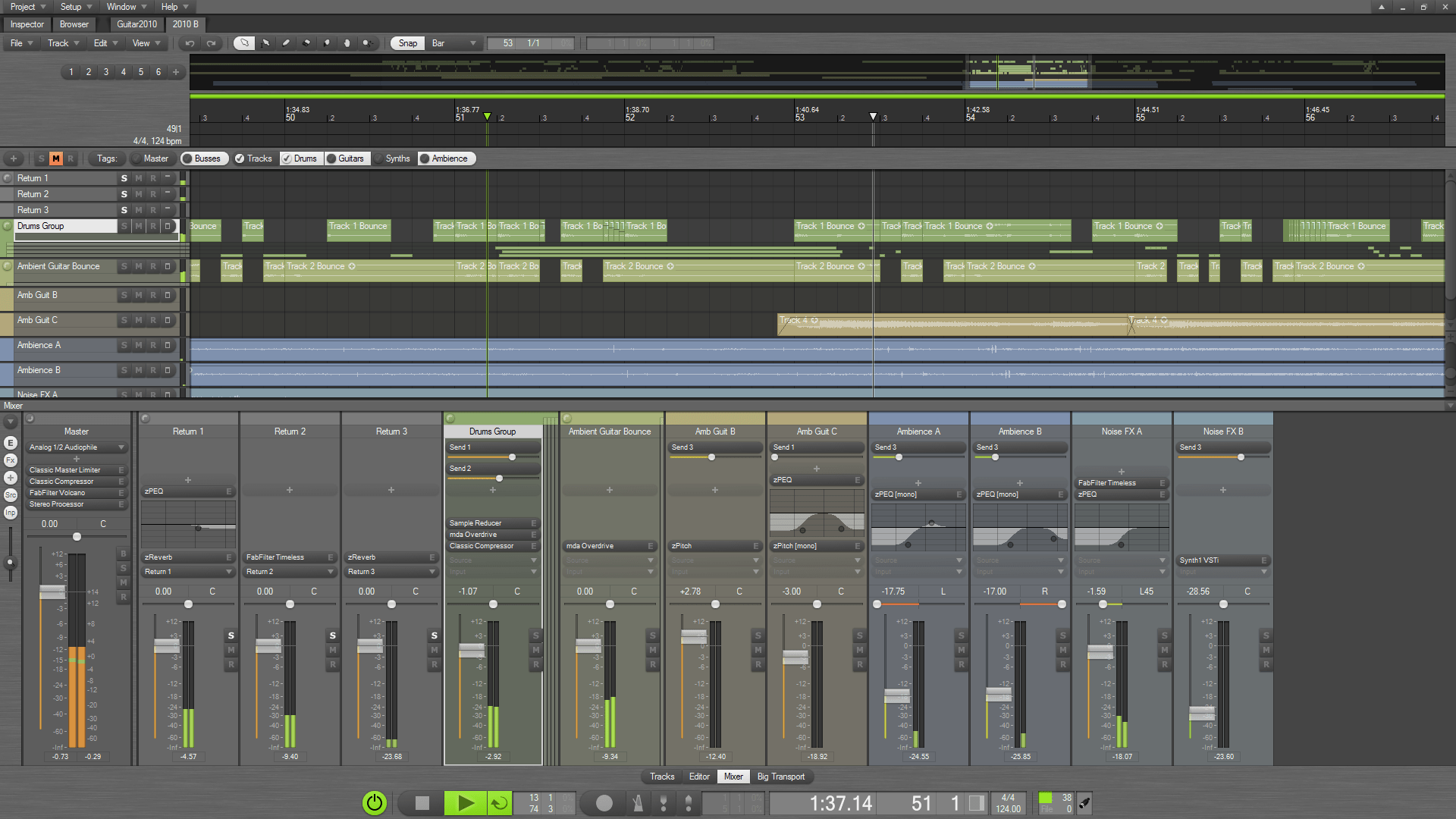 Podium is an affordable, digital audio workstation for Windows that supports recording and editing (for audio and MIDI), and VST plugins. Their free version is still good but has its limitations. If you like it, the full version is only $50 USD!

Recording a virtual Instrument in Zynewave Podium Free [Video below]

A free alternative to PreSonus’ Studio One series with a number of the same, powerful features.

Studio One 4 Prime is PreSonus’ free alternative to their Studio One Artist and Professional series. With it comes unlimited tracks, drag-and drop functionality, nine Native Effects plug-ins and almost 1GB of loop and sample content. This DAW operates on 64-bit operating systems only.

Get Started In Presonus Studio One 4 – In Less Than 20 Minutes! [Video below]

A solid DAW renown in the industry with a free alternative for those unwilling to spend money. 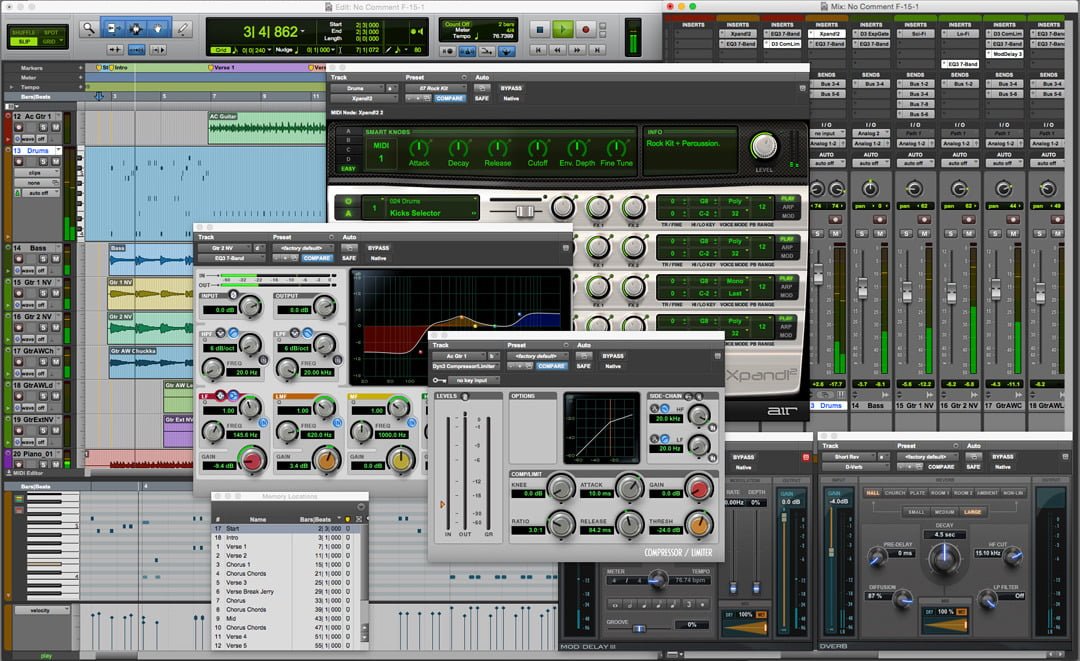 Don’t let the image intimidate you. Although Pro Tools First comes with a number of plugins and effects, it’s not too hard to get started. It comes with the fundamentals of Pro Tools. Some limitations in this version include a limit of 16 tracks and a maximum 3 simultaneous projects. It also requires you to have internet access, and set up accounts with Avid and iLok.

Get Started Fast with Pro Tools | First — Episode 1 [Video below] 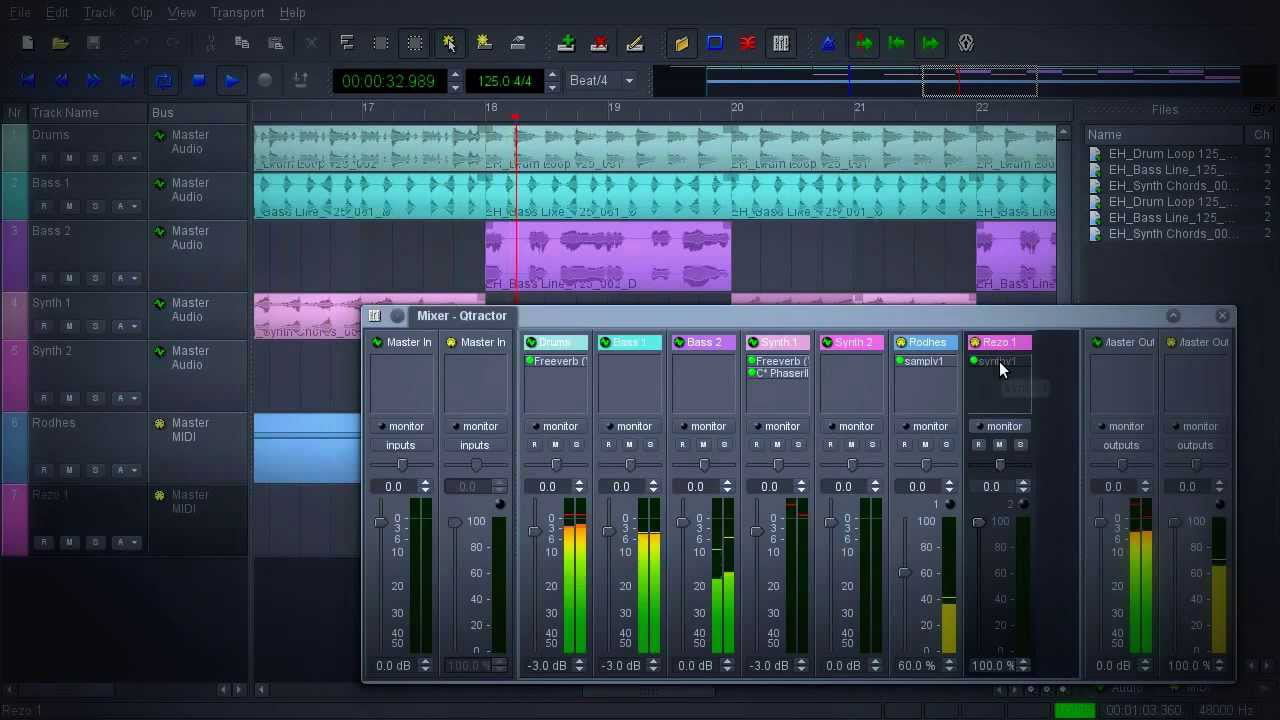 Created by Rui Nuno Capela, Qtractor is a software intended for both beginners and professionals. It is a multi-track composition sequencer for non-destructive digital audio and MIDI. It supports all sample rates and many audio file formats. Very cool software!

Qtractor Tutorial and Review [Video below]

An online studio that allows you to produce, record and remix songs right in your browser.

Soundation Studio is an in-browser studio with multiple tiers: Free; Intro ($1.99/mo); Premium ($6.99/mo). They give you access to an abundance of loops and effects, even at the free level, although you are limited to 10 projects in regards to this tier.

5 things to do in Soundation [Video below]

How to make a trap beat – Soundation tutorials [Video below]

A free, easy and impressive DAW with tracking, sequencing, editing and mixing for Windows and macOS users. 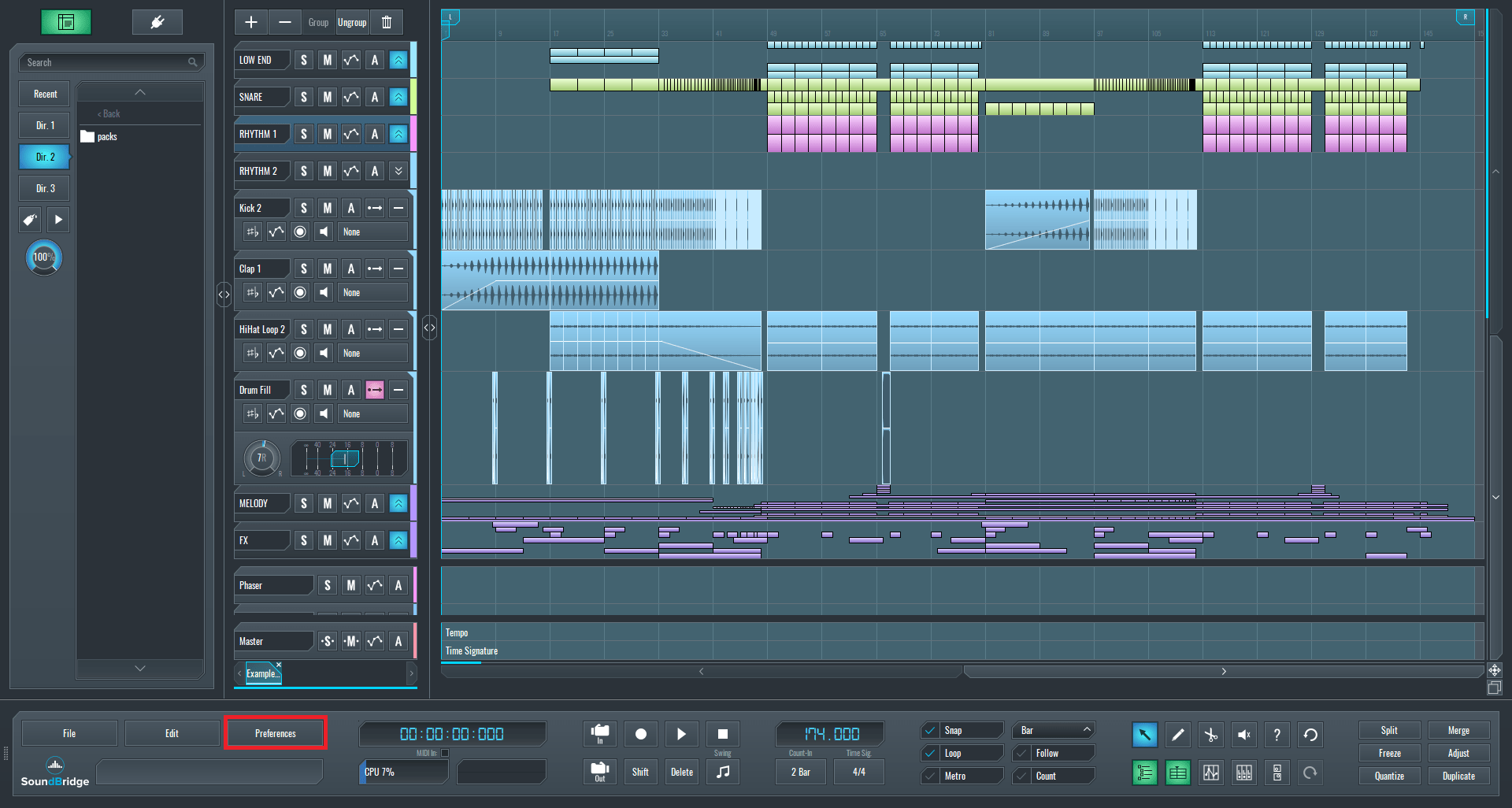 A pretty DAW loaded with the essentials such as: an EQ, compressor, limiter and modulation effects. It has third-party VST, low latency and high-fidelity audio driver support. Available in 32 and 64-bit formats! Everything you need if you’re starting out.

With no download required, Soundtrap is a simple yet impressive DAW for what it is. Plug in your own instrument or use an instrument in the DAW and get started! VST plugins are currently not supported.

Soundtrap for Beginners – Overview [Video below]

A brand new version of Waveform (previously known as Tracktion), available on Windows, macOS and Linux for free. 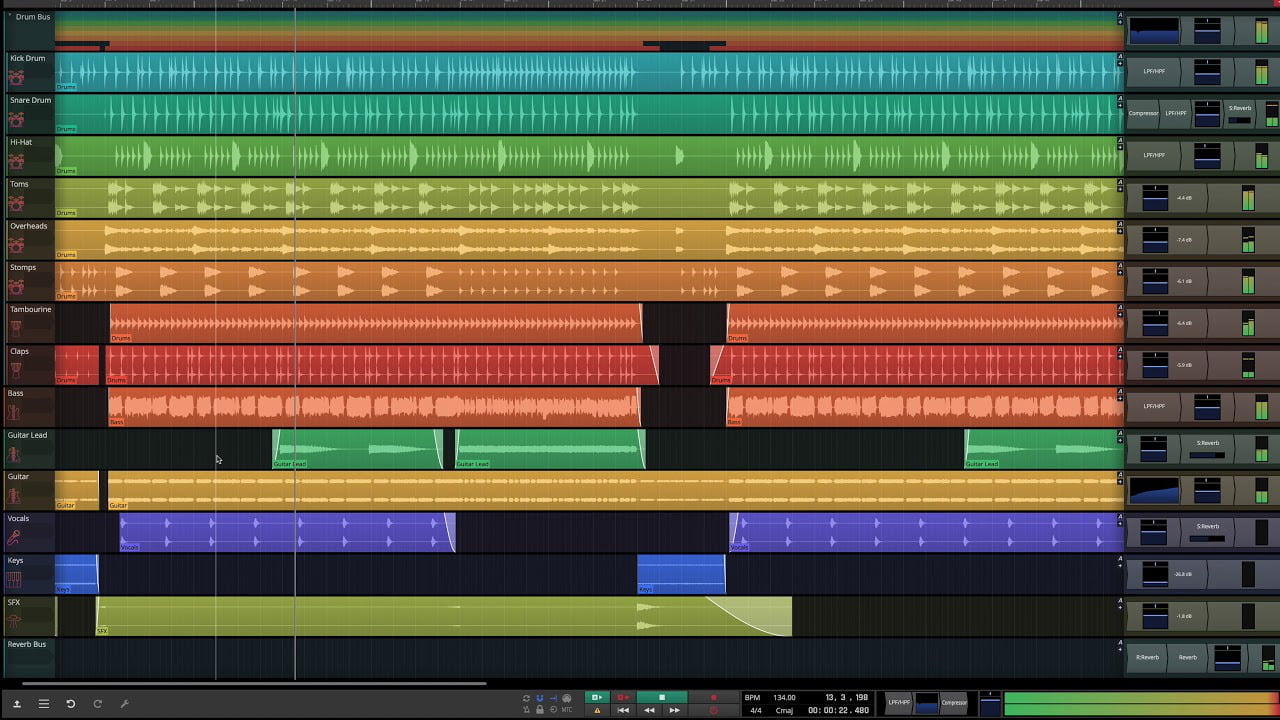 In early 2020, Tracktion announced the release of Waveform 11 and Waveform Free – their free alternative. A software previously known as Tracktion, Waveform brings more with this new DAW. Given its recent release, we list no reviews but can recommend looking up older versions like Waveform 10 or Traction T7, if you want an idea of their DAWs. Waveform Free doesn’t limit you with a maximum track count and gives sufficient freedom to create music. They also provide a 30-day trial of Waveform Pro, should you want to go deeper, and have made older versions of their software free! Looking forward to playing with this!

Another free program by NCH Software (for Windows and macOS) that lets you edit audio and add effects. 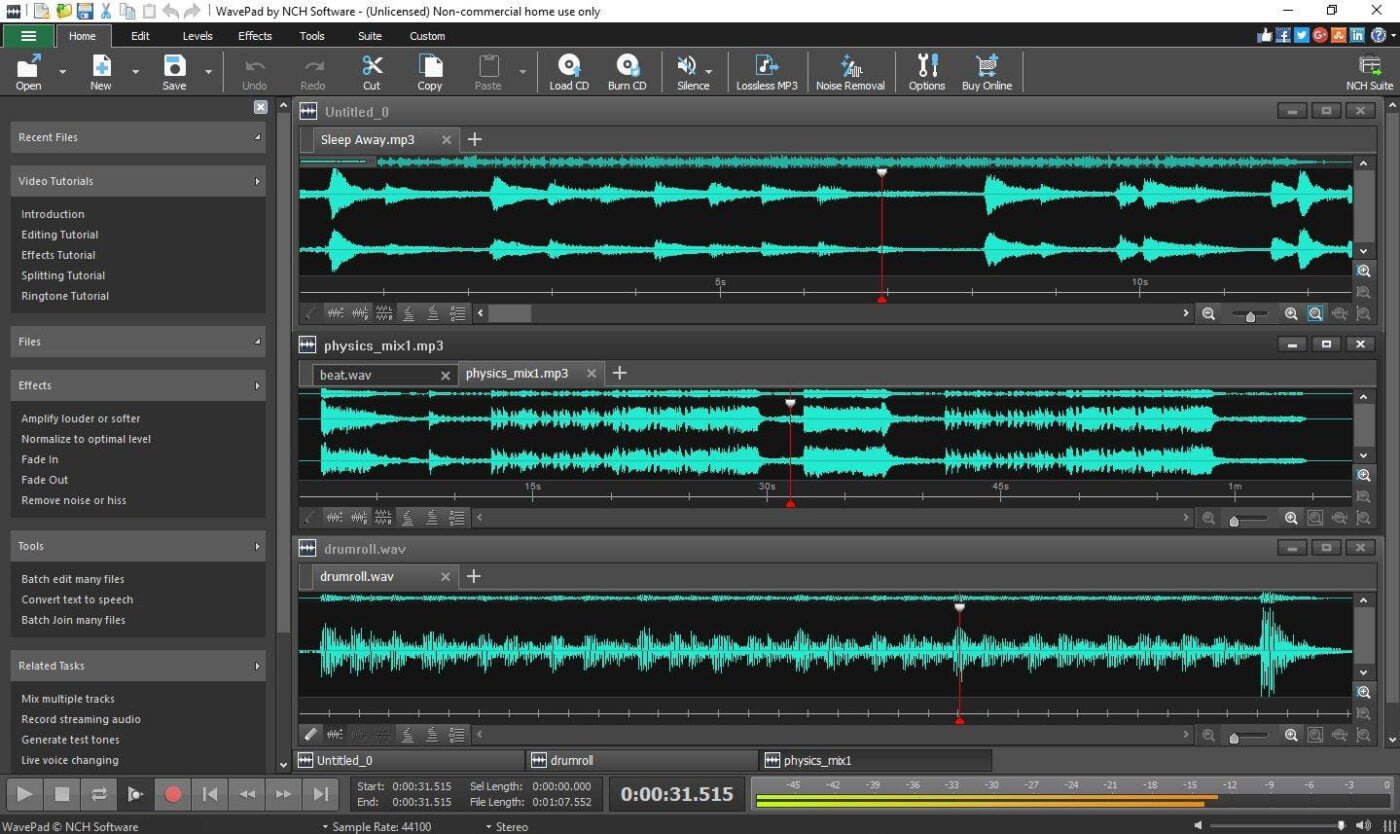 DAWs are often broadly defined; we would describe WavePad as more of an audio-editing software with all of the standard editing functions, audio effects and restoration tools. You can: remove vocals from music; scrub, search and bookmark audio; batch process audio and much more. It has VST plugin support, a free stock audio library, supports sample-rates up to 96kHz, and bit-rates up to 32-bits.

How to Use WavePad [Video below] 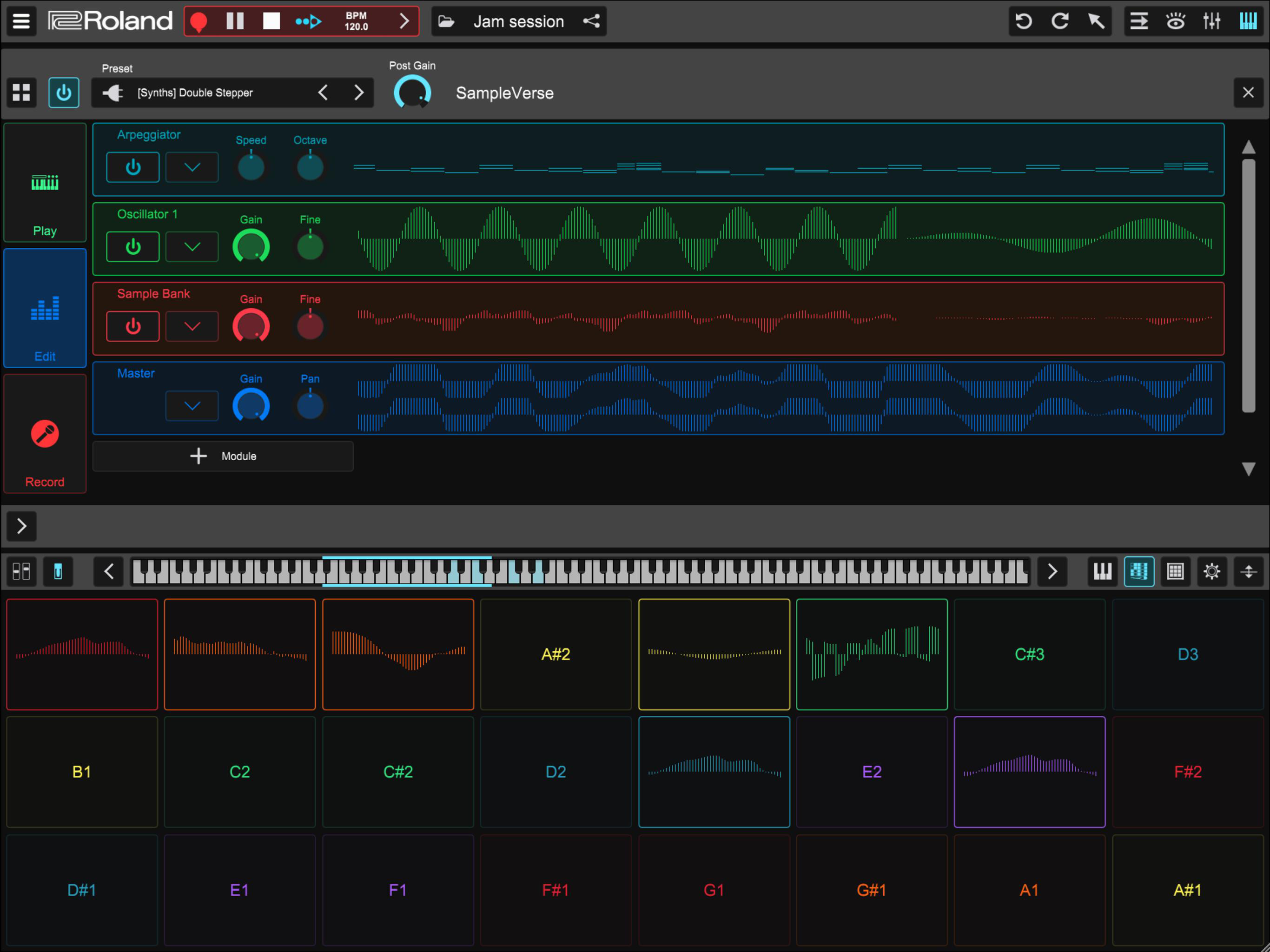 Zenbeats is a pretty software created by Roland and Stagelight. It’s free for Windows and macOS devices but requires in-app purchases. It’s great for composition, beat-making, and lets you save files onto Google Drive and Microsoft OneDrive. This is very useful for saving storage on your HD!

Roland ZenBeats| is it Worth it? [Video below]


DAWPlugins.net: Roland Zenbeats: Review, How to Use & Register for a Free

Quick tour of ZenBeats, the first Roland DAW for multi OS. [Video below]